← Back to blog
Moneymakers
Once Undocumented, CASHDROP Founder Ruben Flores-Martinez Wants Anyone to Be Able to Become an Entrepreneur 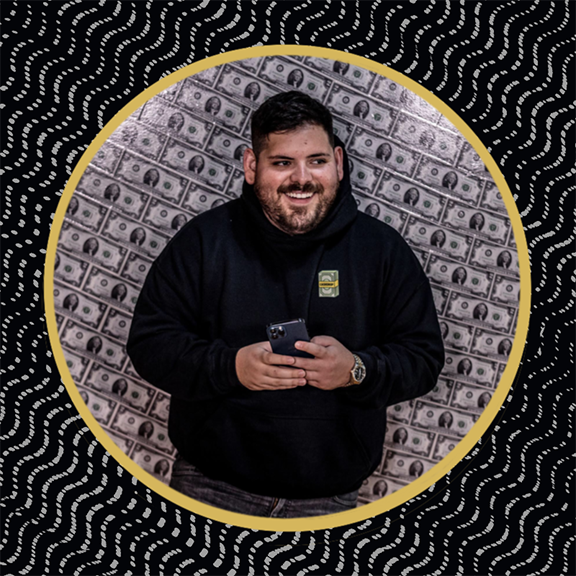 When Ruben Flores-Martinez arrived in Milwaukee, Wisconsin at age 13 after growing up in Guadalajara, Mexico, he set a lofty goal for himself: Harvard. He knew he wanted better for himself and his family after watching his parents, who had been chemical engineers in Mexico, sacrifice everything to cross the border for a better life in United States, working “shitty jobs” rather than in their professional field to make ends meet.

A talented musician and an avid student, Flores-Martinez saw two potential paths for himself: becoming a pianist or an engineer, like his parents. Either way, he saw academia as his path to success. But that all came crumbling down when he found out while applying to colleges that he was undocumented. Suddenly, unable to provide the papers to go to school, he was stuck.

“I became an entrepreneur out of necessity,” Flores-Martinez told me over Zoom, sitting in his apartment in Chicago. “I had schools, scholarships, careers I wanted to pursue, but then suddenly, I was in purgatory. It was a pivotal moment in my life — none of it had been my decision. I was a kid, and I didn’t know what to do. But I had a determination to do something bigger, and a belief my parents sacrificed themselves for me. I didn’t want to throw that away.”

Even over Zoom, I can sense Ruben-Martinez's passion for his story and his company. He talks with gusto, taking me down his history of getting to where he his today, answering questions before I've posed them. I've done countless interviews with people in tech, and while a lot of people bring a certain energy, his doesn't feel forced. It feels genuine.

Ruben-Martinez tells me that the year he graduated high school was the year Steve Jobs announced the app store, and suddenly anyone who could code an app stood to make some serious cash. “I realized that at the end of the day, money is the only thing that matters,” he said. “It doesn’t buy you happiness, but it buys you flexibility, it buys you time, and those things can acquire you happiness.”

So, he went to campus, borrowed his girlfriend’s wifi access, and learned to code. “If my parents could cross the border and risk everything, I could learn how to type some keys into a computer,” he said.

A couple years later, after Flores-Martinez got married and became a citizen, he was able to go back to school. But at that point, “had a dirty taste” in his mouth. “When I was able to go back, I was angry at the system. It had wronged me. I wanted to destroy it.”

He dropped out to be an entrepreneur full-time.

‍
Fast forward a decade, and Flores-Martinez  is running one of the fastest growing start-ups in e-commerce. Just over a year ago, he launched CASHDROP, a tool that allows anyone to set up an online storefront in a matter of minutes and, perhaps most notably, charges businesses nothing to do it: that means  no sign-up fees, no sales fees, no charge to the entrepreneur at all.

In a world used to tech taking in huge paychecks off the backs of workers (think the Uber Eats or Grubhub model for restaurants), CASHDROP instead charges customers a 5% service when they check out — and it’s all done completely contactless.

The idea stemmed from the work Flores-Martinez had been doing for years building people websites and Shopify pages to sell whatever product or service they were offering. “I realized it was very easy for me to keep making websites and making money, but it was too difficult for the average mom and shop owner,” he said. “ I called it the Shopify mafia; it was a racket.”

He also noticed a shift happening in online sales. People were moving to Instagram to drop products and sell directly to consumers, sick of the prohibitively expensive traditional website model. “I noticed a lot of ‘shoot me a DM and then Venmo me’ happening. It was informal and fast and made sense,” he said.

That’s when the idea fell into place: create a platform with the power of Shopify but as simple as Venmo.

“This vision ratified my own experience: I’m the only entrepreneur among my family and friends.

Being an entrepreneur is a luxury, not everyone gets to wake up and throw everything away for a dream,” he said. “You have bills, you have family. You may have a million dollar business idea but you don’t have the time or resources to go after it. I wanted to make getting starting — trying something—faster and simpler for anyone.”

He launched the app at a time when it was needed more than ever: 2020. Suddenly, restaurants needed a contactless way for people to order. Retail stores needed to get their products online, quickly. And people who had lost their jobs were looking for ways to hustle to make money.

Being able to set up your shop in minutes, and then driving customers via social media and in-person with a QR code, means you can start your business immediately, with money going to your bank account instantly through CASHDROP. Taking away all fees means that there’s nothing to lose if someone wants to drop a few products and simply see what happens.

“One guy, he was Latino, he had an idea for a side hustle selling spicy candy out of his house, and after he used CASHDROP at a restaurant, he decided to download it and try it out. It felt simple enough to actually do, where it had always felt too daunting,” Flores-Martinez said. “He’s been so successful that he’s now opened a brick and mortar restaurant and is about to open another one. Failure has long been a luxury, but the stakes aren’t as high by experimenting the app.”

I wondered: was the decision to put the fee on the customers, not the businesses, one that Flores-Martinez weighed heavily? Or was it a gut decision?

“It was an effortless choice, but it was also the big gamble,” he said. “I had realized that all the people in my life back in the Midwest, outside of Silicon Valley, had a negative relationship with tech.

And it’s because it came down to economics - it’s been very one sided, with tech charging fees to get predictive revenue, but that allows them to get greedy regardless of the value they’re providing. People feel that they’re building an empire on their backs. In our case, I need to keep proving the app's worth, and provide the best possible experience, which then lets people become loyal users and pass on the word.”

“We don’t make money unless you make money,” he said. “The product is a manifestation of my beliefs. People can simply set up a store, try something, and if it doesn’t work, that’s okay.”

The fact that this kind of fee set-up is so rare represents what he says is a true lack of understanding in many Silicon Valley circles of what regular working people go through and a lack of representation in tech. As of 2020, Black and Latinx founders received just 2.6% of VC funding.

“Those in the Olympus mountains of tech don’t understand the people working for $10 an hour, but the future commerce exists with these people: the ones being underserved,” said Flores-Martinez. “This is where we’ll find the next generation tycoons, those who’ve been forgotten and cast aside. We’re building this for them, that’s where the big opportunity is.”

In addition to encouraging people to try out business ideas easily, CASHDROP is also going after the 88% of commerce in the world that hasn't yet moved  to the Internet for whatever reasons and obstacles they face.

CASHDROP has grown mainly organically through word of mouth. “Instagram has been our biggest connector, along with seeing the QR codes in the real world,” he said. “We want to hit a million storefronts in the next 5 years."

Right now, the team is lean with a staff of 14, hyper focused on product and customer success.  Flores-Martinez has a habit of putting his cell phone number out publicly,  answering it when random numbers call to connect with potential merchants. The team is also going after bigger opportunities, like hotel partnerships, recently landing a deal with “one of the biggest recording artists in the world” (though he couldn't share more), and a new segment of growth: events.

One massive event CASHDROP is partnering with is Michelada Festival in Chicago, which will attract tens of thousands of people to celebrate the Mexican drink (made with beer, lime juice, assorted sauces, spices, tomato juice, and chile peppers.) The opportunity came up through Instagram. Flores-Martinez said yes not only for the chance to reach a massive audience, but to tap into the Latino culture. “It’s important to me, being a Latino, and the fact that only 1% of capital goes to Latino founders,” he said. “ Latino buying power is also huge.”

Events are proving to be a gigantic source of growth. “Culture happens when people come together — at this event, food, fashion, beauty, music come into one place and that’s what culture is, and CASHDROP is a commerce platform that can bring it all together under the same umbrella: you can buy your ticket, your food, your beer, merch, after party ticket, all contactless without waiting in lines. It opens up pandora’s box. “

In the end, Flores-Martinez says his parents are proud of what he’s doing, and so is he.

“We’re here to help people turn dreams into reality,” he said. “To impact lives, help them make a shit ton of money, and create an alternative reality to the boring predictable way things have been sold before.”