← Back to blog
Creators
Life
Moneymakers
These Covid-Era Restaurant Trends Will Stick Around
From cookbooks to at-home meal kits to open-air pop-ups and food festivals, these are the most innovative concepts to emerge during the covid era. 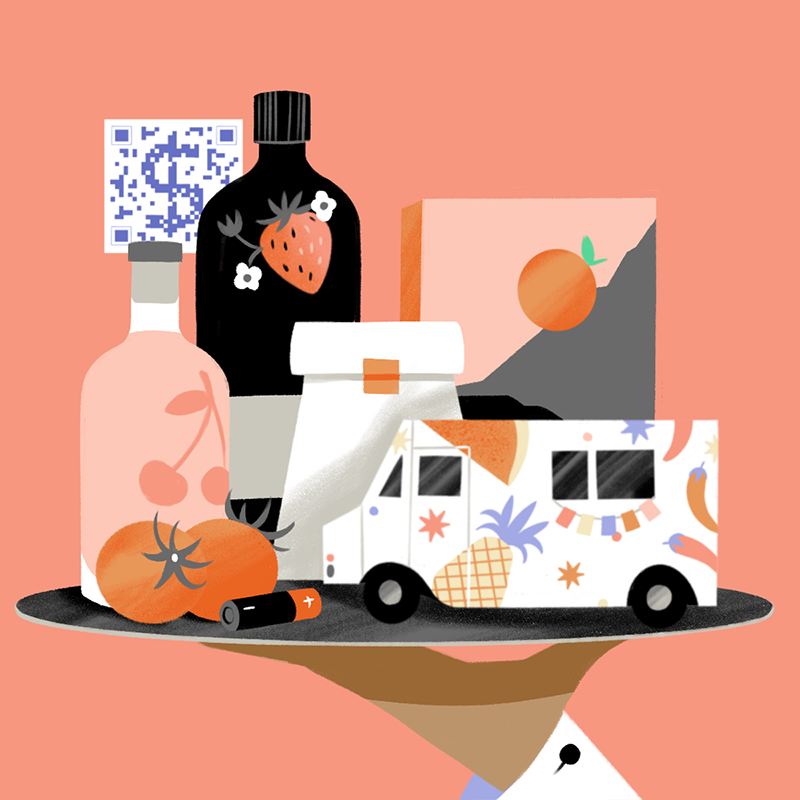 Here in San Francisco, one of the most famous dining destinations in the world, we’ve seen more than 100 beloved restaurants close up shop during the pandemic. Walking around the city and seeing the vacant storefronts is a punch to the gut, even if it’s not a huge surprise. High costs, labor shortages, and razor-thin profits made it nearly impossible to operate a restaurant here even before Covid. Then it got worse.

No industry was spared from the effects of Covid-19, but restaurants were undoubtedly one of the hardest hit. The numbers prove the stark reality: food service industry sales fell by $240 billion in 2020 from a projected $899 billion, and more than 110,000 eating and drinking establishments closed last year nationwide (that doesn’t include what’s shuttered in 2021), according to the National Restaurant Association.

The restaurants that have managed to survive have had to pivot — the overused word used to describe what owners and chefs have had to go through. We saw incredible resilience and creativity among food business owners during Covid-19; they experimented with creative to-go packaging, at-home meal kits, alternative methods for ordering and delivery, forming a deeper connection with communities, and new business models from product lines to merch.

One silver lining: the restaurant sector was forced to rethink everything and get innovative. Now, with vaccines rolled out and the country re-open, most in the industry agree things can’t go just back to “normal.” The status quo from the Before Times wasn’t working well, either. In the post-Covid era, most food businesses will need to continue being creative, especially when it comes to diversifying their income streams, to not only survive but to make their companies genuinely enticing places for employees to work.

So, as we look ahead, what are the pandemic restaurant innovations that will actually stick around? Here are eight trends restaurants will need to embrace to stay relevant and well-funded in the coming years.

The days of earning revenue solely from the four walls of a restaurant are over. Expect chefs and owners to keep innovating in e-commerce to diversify their income streams. A prime example: David Chang, the owner of Momofuku restaurants — and the rebel of the industry.

Chang shot up to celebrity chef status not only because of the success of his restaurants and the iconic modern Asian comfort food they serve, but by being, well, everywhere. From a Netflix show to his own podcast to magazine covers to grocery stores to his new memoir, Eat a Peach, Chang is an outspoken voice that often calls out what needs to change. He’s advocated for more government relief for restaurants during the pandemic, but also for owners to think creatively to get beyond old models.

Chang has told publications like Fortune that his goal has long been to have 50% of Momofuku revenue come from outside of his restaurants. And then he turbocharged that objective during the pandemic. In the Momofuku lab, his team is constantly researching and developing products, then launching experimental Momofuku-branded product lines to consumers. That’s included a Ssam sauce for Kraft Hein, meal kits on Goldbelly, and various sauces and spics on Peachy Keen, an online shop with pantry items. He also offers online cooking classes and merch on the Peachy Keen site.

Chefs across the country became more David Chang-like this year to stay in business. Goldbelly, which offers restaurant specific meal kits and packaged foods, nearly doubled its restaurant and customer count during the pandemic.

Experimenting in e-commerce often leads to interesting collaborations across the industry. One of the coolest collabs we saw during the pandemic was The Haus Restaurant Project, which launched nine new aperitifs created and inspired by chefs, with 100% of profits going to the restaurants directly.

In an era when actual print book sales aren’t that great, cookbook sales haven’t just stayed steady, they’ve grown. Everyone from chefs to home cooks to celebrities to bakers and restaurants is launching a cookbook these days. Traditionally, it’s been a lengthy, several-year process, but new ways have popped up that allow for people to be more timely and responsive in turning a cookbook are more quickly.

We’ve seen community cookbooks take off during the pandemic from home chefs around the country. Take the Cangianos family in Staten Island, which started a Facebook group to share recipes, eventually growing so big that they decided to publish them in a cookbook. The mother-two daughter trio entitled the book the “Quarantine Kitchen,” made sales through Etsy and partnered with a small printing press in Kansas, with proceeds going to charity.

Somekind Press, a groundbreaking and community-focused micro-publisher, is taking this concept a step further, disrupting the traditional cookbook publishing industry’s model by “shifting who gets the money,” writes Paula Forbes in Food & Wine. The model of the company—which started as a way to help food businesses make money during the pandemic—is to only print once a book receives at least 100 preorders. This means people don't have to pay a fee upfront to get started, allowing more small restaurants, bakeries and others to get a cookbook out, rather than just famous chefs. "It is about supporting your local venue,” cofounder Simon Davis told Food & Wine.

2020 was the year of take out. If you’re anything like me, you may have gotten bored of your go-to dishes and wanted to try new ways to keep meals interesting. That led to a lot of people buying meal kits from restaurants, ie curated boxes of ingredients that allowed you to cook restaurant-like meals in your own kitchen.

One of the smartest ideas in this market was the Omsom kits, founded by two sisters Vanessa and Kim Pham. The duo, whose parents came to America as Vietnamese refugees, saw an opportunity to help restaurants by exposing more people to the power of cooking flavorful Asian food at home. The idea: source spices and sauces from chefs that people can use as a “starter” base of flavor for a meal — just add the starter to your choice of protein and veggies, and voila, a restaurant-quality Asian meal in less than 30 minutes. One of the best starters we’ve seen comes from Duki Hong, the former exec chef of NYC eatery Kang Ho Dong Baekjeong and author of the Koreatown: A Cookbook.

Restaurants across the country also got into the meal kit game, including on Goldbelly and through their own sites, including Chicago's The Publican’s Pub Chicken meal kit, Chef Michael Solomonov's Abe Fisher restaurant’s in Philadelphia that “celebrate the flavors of the Jewish diaspora,” and flavorful Arab food at Reem’s in San Francisco.

During the pandemic, a lot of food entrepreneurs moved off of Venmo, Square and other legacy payment methods to a new tool that launched in 2020: Cashdrop. Founded by Ruben Flores-Martinez, who has shared his story about the challenges of being an immigrant from Mexico in the tech community, the platform allows businesses to create a customized online shop in a matter of minutes. In the case of restaurants, they can “drop” menu items whenever they want, change them easily, and make the layout / images look appealing.

Cashdrop has soared in popularity because it allowed businesses to sell items via completely contactless payment. Consumers simply click on a link, order, and settle up via Apple Pay. The major difference — and reason why so many restaurants love Cashdrop — is that it doesn’t charge businesses a commission or fee. Instead, it shifts the burden and charges consumers a 5% fee, which makes it different than Square or Cashapp. The tool has been huge for farmers markets vendors, food trucks, and pop-ups, but is also now used at a ton of traditional restaurants, breweries, wineries, etc.

Print menus and in-person ordering will come back to some degree, but this style of mobile ordering will continue at many food businesses given its speed and convenience.

The traditional restaurant business model of getting “butts in seats” didn’t work out this past year, so companies started experimenting. Take the model of two-hour delivery on Fast AF, which delivers food products in less than two hours to your doorstep. So far, the company operates in San Francisco, Miami, New  York City, and Los Angeles.

Then there’s Club Feast, which offers pre-scheduled restaurant delivery for less than 40% from competitors. That means, with no membership fee, you can browse local restaurants and then select a plan signing up for a set number of meals from that restaurant throughout the week. Consumers save money on the discounted bundles, and restaurants lock in loyal customers. Win, win. We’ll likely see more of this experimentation in the future, especially for people who want healthier, more consistent eating habits ie: organic, vegan, plant-based on the reg.

Shop local has taken on a new meaning during Covid. A lot of us, seeing how much local businesses were suffering, turned more attention toward giving our hard-earned dollars to small, independent shops. We saw thousands of Kickstarters keep restaurants and their workers afloat.

Restaurants have realized, even more so, the importance of fostering community and gaining loyal customers. An example of a cool community-based event we’ve seen take place is the Family Style Food Festival, which was launched by streetwear company The Hundreds in 2019 to celebrate the intersection of food and streetwear. Restaurants that took part collaborated with the brand on looks to wear to the event, and people showed up in their best streetwear attire. In 2020 - the year of canceled festivals - this one still went on, but as a drive-in show. People were able to order food via Doordash to be delivered to their car while watching movies, comedy, and live music.

Restaurants across the country are having a hard time hiring back employees after laying staff off during the pandemic. Some say that’s because of the ongoing unemployment benefits available, but the reality is likely much more complicated. With their razor-thin profit margins, restaurants have historically not be great working environments in terms of pay, benefits, and culture. Now that many have found other ways to make money from home - and others having moved from city centers - restaurants will need to incentivize people to work for them.

It’s especially hard to find people to fill back of house positions — cooks, dishwashers, etc — since they make significantly less than servers, who receive tips. One strategy taking place here in San Francisco is doing away with the tipping model and going the more European route of having service charges included in the meal prices or automatically added to introduce more pay equity among staff. The iconic Zuni Cafe in SF recently made this switch, which would result in a pay increase for back of house staff but has received backlash from servers who say it will mean a pay cut.

Others, including fast casual joints, are also realizing they need to raise their wages to find talent. A recent national story caught attention about Klavon's Ice Cream Parlor in Pittsburgh receiving "well over 1,000 applications" after raising the wage to $15 (the minimum wage in Pennsylvania is $7.25)